In 1986, the United States began striking gold bullion coins to compete with world bullion competitors, such as the Canadian Gold Maple Leaf, the South African Gold Krugerrand, and the Chinese Gold Panda. The value of these coins was intended to be tied directly to their metal value, although in some cases (where mintages were low), a collector market has developed. The bullion value of these coins far outstrips their face value, making them the ideal product for numismatists and investors.

The US American Gold Eagle represents the US entry into Gold Bullion investing and became the first gold coin to be minted, in the US, since 1933. When the Gold Bullion Act of 1985 was passed, the legislation demanded that there would be four weight sizes offered and two different types of coins minted. This resulted in the American Gold Eagle containing the 1 oz, 1/2 oz, 1/4 oz, and 1/10 oz in sizes. There were also two conditions minted, brilliant uncirculated and proof (although the proof condition was only offered in 1 oz increments at first). The legislation also specified that the precious metals used, in the making of the American Gold Eagle, would come from US mines. Depending on the year, size of the coin, and market demand, the Gold Eagles’ mintages vary greatly. The American Gold Eagle is released annually and displays the same design. The US Mint throws out its dies each year to ensure a crisply minted coin every time. 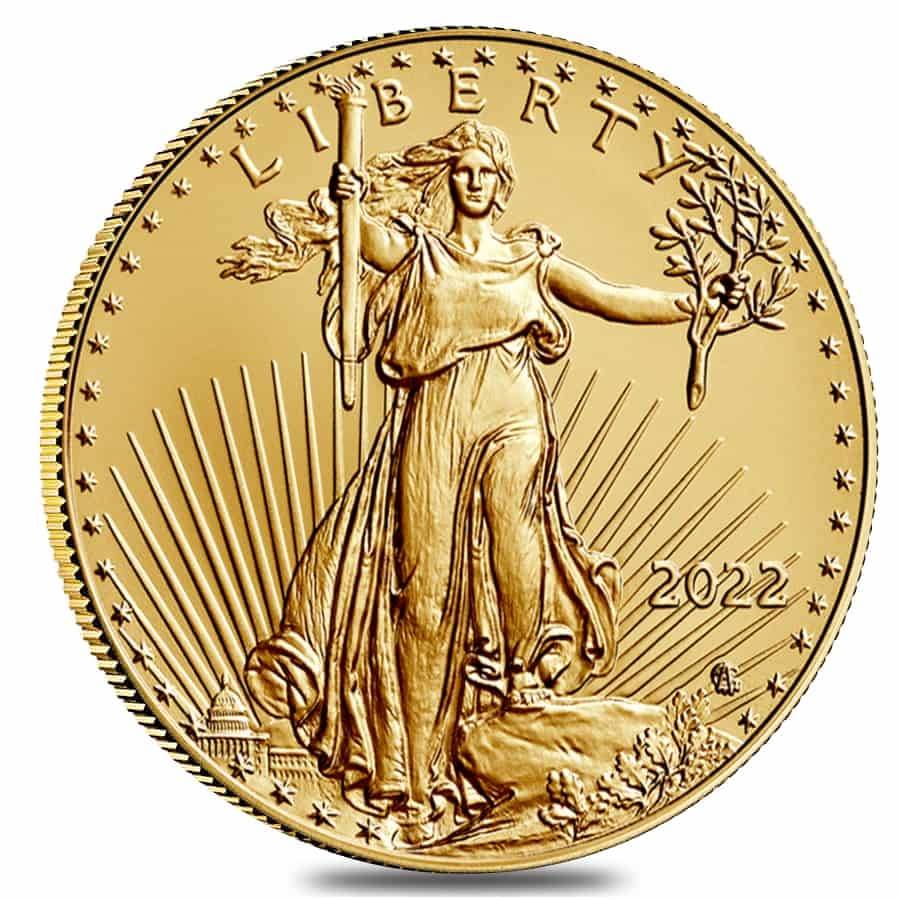 The American Gold Eagle is considered to be 22-karats, instead of the ideal 24-karats. The 22-karat alloy is also referred to as “crown gold” since this was the English standard of metal content and hasn’t been used since 1834. The American Gold Eagle actually contains one solid ounce of .999 pure gold, and it also weighs more than one ounce, due to the silver and copper added. This alloy of metals results in a wear-resistant coin, allowing for it to uphold over time. Both the weight and gold purity are authorized by the US Mint and are recognized, by the US Congress, as true gold bullion coins.

Reimagined by sculptor, Miley Busiek, the design of the US American Gold Eagle features the most iconic US coin design. The obverse follows the artistic design created by Augustus Saint-Gaudens, for the $20 Gold Double Eagles, issued from 1907-1933. Saint-Gaudens was exclusively picked by president, Theodore Roosevelt, to design an image that would be a part of US history, while also reinvigorating US gold coinage. The Lady Liberty design has been used as a symbol of patriotism since the US began minting their own currency and her message of courage and power still reigns true.

The design features a fierce Lady Liberty carrying an olive branch in one hand and an ignited torch in the other. The olive branch represents the country’s desire for ultimate peace. The torch is the symbol of enlightenment and has been used, in the United States, as a means to freedom and liberty; enlightenment births freedom. Lady Liberty is stressed in a loose and flowing robe, marching with the US Capital building behind her. Next to her is the coin’s date of mintage; from 1986-1991, the coin’s date was cast in Roman Numerals, instead of the familiar Arabic Numeral System. Along the rim are 50 stars, each representing a US state, a design that has been used on other emblematic US coins, such as the Morgan Silver Dollar. The original design featured only 46 stars, since that was how many states existed from 1907-1933.

The reverse displays the emblem of the nation, hand-picked by the Founding Fathers. The bald eagle is the king of the birds of prey and represents fierce beauty, strength, and independence. There are 3 bald eagles represented on the reverse design of the American Gold Eagle. The eagles have made a nest of olive branches and have started reproducing, with an infantile eagle represented under its mother. The coin’s weight, purity, and monetary value are written underneath the eagle family.

Since the Proof American Gold Eagles are not minted, at the same rate as the brilliant uncirculated coins, their value is higher and is the ideal investment not just for collectors, but investors as well. The proof finish is described as mirror-like and although it contains the same alloy as the brilliant uncirculated version, making it a more durable coin, the proof finish is more sensitive to contact, resulting in an easily scratched coin. Numismatists prefer keeping their Proof Gold Eagles in their original packaging for protection.